skip to main | skip to sidebar

& I'm really sorry, honest. This serious blogging is all well and good when I can motivate myself to do it. [I mean, my brain sort of works in blog posts? Yet when it comes to typing them up, I get distracted and wander off and before I know it, it's three weeks later.]

& Anyway, my dear cousin has tagged me to do a meme. A meme of six things that make me happy. Let's all remember that I'm really terribly fickle, so if I were to do this meme next week, my answers might be entirely different.

Things I Like. Yo.
(in no particular order)
i. Jon McLaughlin.
Singer-songwrighter-pianist from Indiana. I've been listening to his music obsessively-and-on-repeat for a while now. Also, he's pretty. 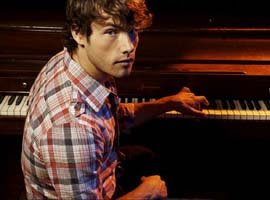 No. Really, really pretty. Not well-known in Ireland at all although he did perform at this year's Oscars (a song from Enchanted). Of course, that's not going to mean very much to the Irish audience, given that the show was most convincingly thieved by Glen Hansard and the wonderful Marketa Irglova but this guy writes some rather sweet songs and is pretty awesome on the piano and there is something heartening about knowing that people still write songs like Perfect (& in my life if i can have one thing i don't deserve/then i have never wanted anybody else but her).

ii. Saturday mornings.
Which is funny, given that I try to sleep right on through Saturday mornings if at all possible. I very rarely have to work on a Saturday which is rather wonderful. Occasionally, I manage to crawl out of bed and even make it to the shop to buy the Guardian and bacon and eggs. (Note: I do change out of my pyjamas in order to go to the shop but sometimes, I'm in the minority down at Spar.)


iii. DVD Boxsets.
It's OK! I will narrow this down. A bit. While working as a junior doctor, I very rarely had the time to watch television at normal person hours. I might occasionally catch a late night repeat of Battlestar Galactica or Heroes but that would be about the height of my consistency of viewing. So, I began to invest in boxsets (and this is where Saturday mornings come in handy). I'm one of those people who can quite happily sit down and watch episode after episode of a given TV show. Once, I watched the entire third series of The Mighty Boosh in one sitting. The next morning, I woke up with an actual hangover, no joke.

iv. Neil Gaiman.
My favourite author (and anyone who knows me, knows how much I love reading and having and owning books, so this is big, man). Mr Gaiman is reason I read - nay, purchased - graphic novels, in the form of Sandman because I figured that if he wrote them, they must be worth a look (they are). I think I was first introduced to his writing by way of a recommendation. American Gods is an incredible novel with incredible scope and if you haven't read it ... why the hell not? I have countless new books I haven't actually read yet but I know that I will re-read American Gods, Stardust, Sandman, &c many, many times before I get around to reading some books for the first time.

v. Starbucks Iced Caramel Macchiato.
OK, so I'm a sell-out. But there's something about this particular coffee that reminds me of summertime (and given what Irish summers have amounted to in recent years, that's no mean feat). Also, that much caffeine and that much refined sugar do wonderful things for my energy levels and I can conduct conversations at a much higher rate than usual!

& I swear I'll try to update more often. I still have movies and plays to review and I'm going to see No Man's Land at the Gate Theatre next week. Oh, what a life I lead.
Posted by Lindsey at 4:00 PM 2 comments:

Time sort of got away from me there.

& aw, man. Where did those two-and-a-bit weeks go? I totally meant to blog, like, every other day. I've to ramble about 3 movies (one of which does include The Dark Knight, so my esteemed first cousin can stop mocking me now, OK?) and a play, but it's 12.30am and I have to work tomorrow.

& it sort of occurred to me today that I don't measure the time it takes to walk to work in actual minutes. I count it in songs. Currently, I listen to a particular playlist on my iPod (a playlist imaginatively entitled august oh-eight). I hit play when I leave my apartment and I get through Jon McLaughlin's Beating My Heart, Ryan Adams' Touch, Feel & Lose, REM's Near Wild Heaven, The Killers' When You Were Young and the first half of Leonard Cohen's Anthem. Well, I thought it was an interesting observation (and sometimes I want the journey to be longer so I can listen to more songs).
Posted by Lindsey at 4:33 PM 3 comments:

Lindsey
Many years pass, full of histories and myths about twin boys brought up by a wolf or a prostitute, about fratricide and aqueducts and centurions and Kings of England, before Aeneas meets Dido again, in a strange bar in a strange country. He raises his glass to her and she turns away and walks, one high-heeled foot in front of the other, towards the other man. Aeneas may be dead now but that still smarts like a bitch.

[if music is the victim]

[we all said things we didn't mean]